The night before Russia invaded Ukraine, Igor Komarov, a researcher at Taras Shevchenko National University of Kyiv, pulled an all-nighter. He was putting final touches on a proposal and construction blueprints headed for the Ukrainian Ministry of Economy. The Ministry of Education and Science had already given it a thumbs up. The plan is for Biomed Science Hub, an interdisciplinary research and education center where labs are to develop biomedical technologies at the interface between chemistry, physics and biology. From his apartment window in Kyiv, he saw missiles flying overhead. “It’s a very frightening thing,” he says. His family moved to the countryside; he is mainly in Kyiv.

As a synthetic chemist, Komarov enjoys designing and developing new compounds. He directs the university’s Institute of High Technologies, which has 360 students. He also advises companies such as Enamine in Kyiv, which produces building blocks for drug developers. There’s also Lumobiotics, which he co-founded. Based in Germany, it develops light-switchable peptide drugs. Komarov is the principal investigator of ALISE, or Antibody Light-Inducible Selectivity Enhancement, a public–private, partly EU-funded, consortium devoted to anticancer peptides controllable by light. The EU program officer suggested postponing ALISE. Komarov declined. At its Western European sites, he says, “we continue the project.” After the war, he wants to keep parsing the molecular dynamics of ligand–receptor interaction also using photo-switchable compounds. 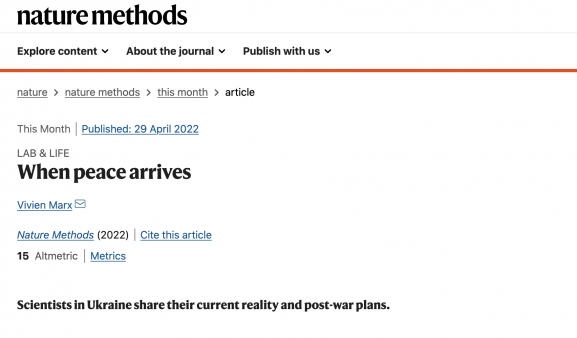